Snakes! Well, let me start by saying, I like snakes. Mostly visible in the summer months, you can often find them sunning themselves on dry days. Fortunately, you don't have to worry about the infamous Habu snakes of Okinawa, but Yakushima does have a bunch of other species, including poisonous snakes like the Japanese pit viper, called the mamushi. Here are some of the snakes that I've come across. 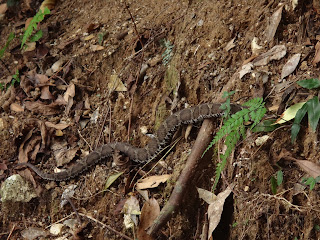 This is the Japanese pit-viper found throughout the country and other parts of east Asia. The venom contains both hemolytic and neuro-toxins. Fortunately, these snakes tend to stick to the shadows and be more active around nightfall, but every once in a while I come across a young one sunbathing in the early summer or on dark, overcast days. I've never spotted them around the mountain huts or at elevations over 900 meters, and I've never heard of anyone getting bit in Yakushima, but this is the one snake you be aware of. Thankfully, they are relatively easy to recognize by their triangular heads, black eye-mask, and overall pudginess. 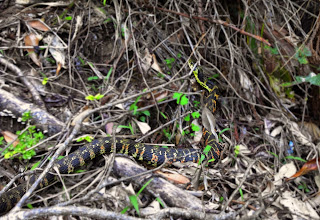 This beautiful snake is also poisonous, but most sources agree that you don't have to worry much about them. The fangs, located in the back of the mouth, are good for subduing prey, but not very effective for defense. Back in 2017, a child was bitten in Hyogo prefecture and temporarily lost consciousness, but, on the other hand, I have an acquaintance who was bitten when he accidentally grabbed one, but received no poison! Would-be predators know better than to attack the tiger keelback because, when threatened, glands on the back of its neck swell up to release the toxins it sequesters from eating Japanese common toads. I often spot this one sunning itself. 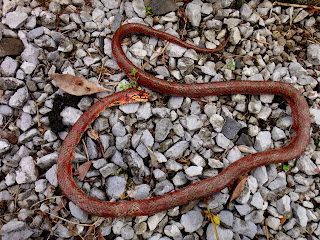 These are not known to be dangerous, but the juveniles have a coloration similar to the tiger keelback and I've had one take a defensive, striking stance as it backed away from me. The adults are much more drab, but the young ones are often spotted in the spring. The Japanese name reflects their use of rodent burrows. 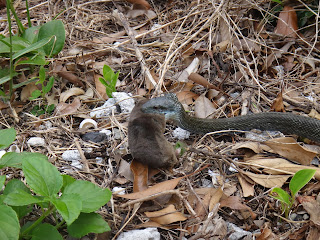 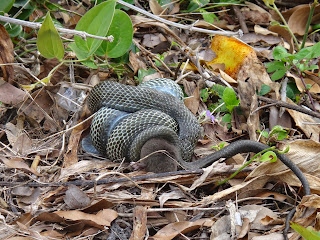 This common snake tends to freak people out because they can grow to be a couple meters long and they aren't exactly shy. Excellent hunters, they are revered by farmers for keeping rodent populations in check. They can be spotted both in the mountains and in fields outside of town. The juveniles have a coloration similar to mamushi. 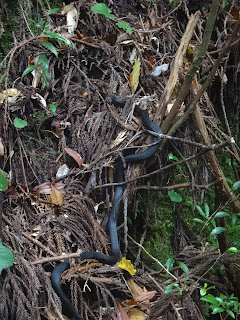 The majority of these guys that I've seen were victims of traffic encounters, but apparently they're pretty common. Most of the ones I've seen are the blackish variety, but they can be pale grayish with dark lengthwise bands that sometimes tend towards spots. 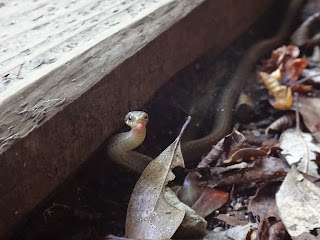 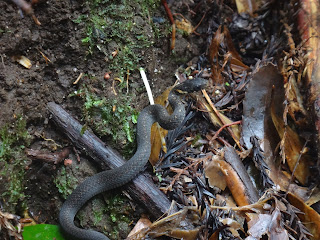 What can I say besides this is one cute little snake! When startled, they often take an aggressive posture, raising their heads as if readying to strike. They appear so intimidating that supposedly people used to think they were poisonous, giving them the Japanese name, Hibakari, or "merely a day", as in, "merely a day left to live if you are bitten." But, in fact, they are quite harmless, and if you look closely, they look like they're readying for a kiss! I spot lots of these guys in early summer. 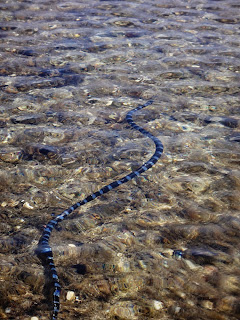 You might see these beautiful, graceful snakes if you go snorkeling or swimming in rocky areas. I admit I worry about stepping on them when wading in rocky areas. Thank goodness they're docile because sea snakes apparently have some of the most deadly venom in the world! I spot them most often in June and July, but that may be because that's when I'm swimming! Anyways, enjoy their beauty if you do spot one.

Most of these snakes enjoy sunny weather as much as tourists, and there are several more non-poisonous species in Yakushima that I haven't mentioned. So be on the lookout this summer and maybe you'll be lucky enough to spot one!
Posted by Yakushima Life