If you're reading this, chances are you have also heard about Yakusugi, the Japanese cedar trees (Cryptomeria Japonica, or sugi in Japanese) on Yakushima that have grown to an age of one to three thousand years--perhaps even older!

Where can we see them? How many are there? What makes the famous Jomon Sugi special? What makes them different from normal Japanese cedar trees? I could write a book trying to answer all these questions, but for now, let me answer the first. (To find out more, the Yakusugi Museum is a great place to start. In fact, most of the measurements and estimates listed below are quoted from Museum publications.)

In Edo times, loggers cut down 50 to 70 percent of the large old-growth Japanese cedar trees on Yakushima, and countless more were felled in the 20th century. Those that were spared were too remote, not of desirable quality (Remember that Edo-period loggers were looking for straight, easy-to-split lumber, not beautiful burl!), or set aside for other reasons. (For example, trees in recreational forests like Yakusugiland or Shiratani were spared the axe in the second half of the twentieth century.) Of the Yakusugi left, especially noteworthy or easily accessible Yakusugi (as well as a few others named after people) have been given names. I should mention that over the years as logging villages have closed and Yakushima's network of trails has developed, some of these are no longer so accessible and others have fallen down. There are also many noteworthy non-Yakusugi trees that have been given names (such as Sanbon Sugi and Nidai Oh Sugi in Shiratani) and quite a few fabulous Yakusugi without official names. I have excluded most of these from this list.

So, without further ado, here are some great places for encountering Yakusugi Trees and the named Yakusugi you are likely to see there. *Yakusugi* set in asterisks are those I personally recommend.

I can't overstate how much this wonderful recreational forest park outshines its name. With short trails for non-hikers and longer trails for experienced hikers, this is a fantastic place for hiking, especially if you want to see Yakusugi.

If that's not enough to quench your appetite, there are also trails leading the prepared hiker out of Yakusugiland into forests inhabited by many more Yakusugi:

Even visitors who cannot walk can see two Yakusugi trees. Both of these trees are located next to the road between Yakusugiland and the Yodogawa Trail Head.

This is the trail head hikers use for day-hikes to Mount Miyanoura, and while there aren't any large trees among the highest mountain peaks, there are a couple not to far from the trail head. Yakusugiland is definitely a better bet if your goal is to see Yakusugi, but so many people come to Yakushima for the purpose of climbing Mount Miyanoura that I think especially the first of these is worth mentioning.

Jomon Sugi is the most famous tree in Japan, but a hike there also takes you to a beautiful forest full of Yakusugi trees. Although the trail above Jomon Sugi that continues (in about one or one and a half hours) to the Shin Takatsuka Hut passes by no named Yakusugi, the forest there is also full of many beautiful Yakusugi Trees.

There are also a couple noteworthy stumps along this trail:

Most famous for the moss forest that inspired the movie, Princess Mononoke, and the Taiko Iwa Lookout, Shiratani is also home to several grand old Yakusugi. The park offers three trails, so hikers can choose the trail that suits their tastes and fitness level as well as the weather. (Shiratani sometimes floods in heavy rain!) Each of these trails passes by a Yakusugi tree.

A hike up to Ryujin Sugi passes through forest that has been heavily logged in the 20th century, but to be alone with the cicle of huge trees and stumps clustered around Ryujin Sugi is a powerful experience. Highly advised alternate hike if you're thinking of hiking to Jomon Sugi but prefer more solitude.

The beautiful but strenuous trail up Mt. Mocchomu should be done in daytime by well-prepared hikers. (When the fog rolls in, finding the way back can prove treacherous.) It is a steep but fantastic hike that shows off Yakushima's vertically distributed flora.

Fabulous trail through one of the most pristine forests in Yakushima, but it takes some planning. It's usually done as part of a two- or three-day hike across the island's interior. Even though I've only listed one named Yakusugi here, there are plenty of large, impressive trees! 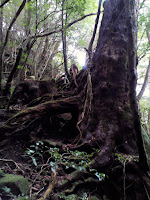 Of course, these aren't the only Yakusugi in Yakushima! But these are the ones most people come to see. Other trails, such as the trail to Anbo MaeDake (left) also pass by great Yakusugi trees. I hope you will find a tree with which you fee a special connection.


(The circumferences and age estimates I've listed hear are mostly sighted from documents published by the Yakusugi Museum, but a few I just found on the Internet. Circumference is measured at a height of 1.3m from the ground.)
Posted by Yakushima Life