Common Birds in the Mountains

I'm often asked why we don't see more birds along the trail. There's quite a few song birds in the forest, but they are small and the brush is thick! In fact, I usually don't point them out to my guests unless they are particularly visible or we have plenty of time to spare. Sometimes, I'll even wager a can of coffee that you can't spot the bush warbler, who often sounds so close, but hides quite well.

Here are some birds that are often seen, or rather heard, along the mountain trails. If you're lucky, you may spot others, such as a woodcock, owl, or ashy minivet. In the coastal plains and around town, you can see other birds, including pheasants, blue rock thrushes, and wagtails; and of course, there are many waterfowl near the coast and the mouths of rivers. 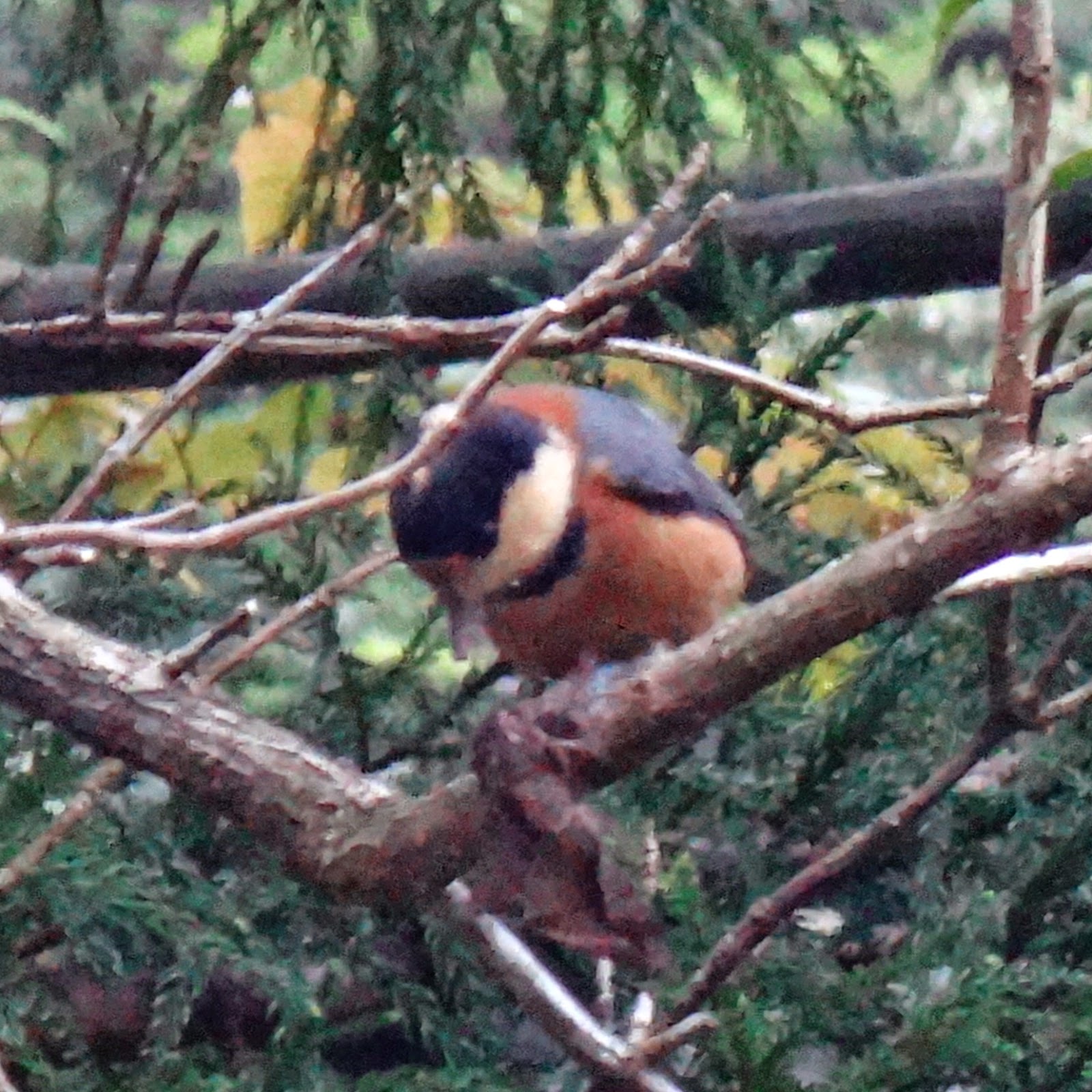 Varied Tit, Parus varius (yamgara)
Often comes in small flocks of friendly birds. They have both a horse, jay-like caw and a sweeter chikapi~, chikapi~ voice. 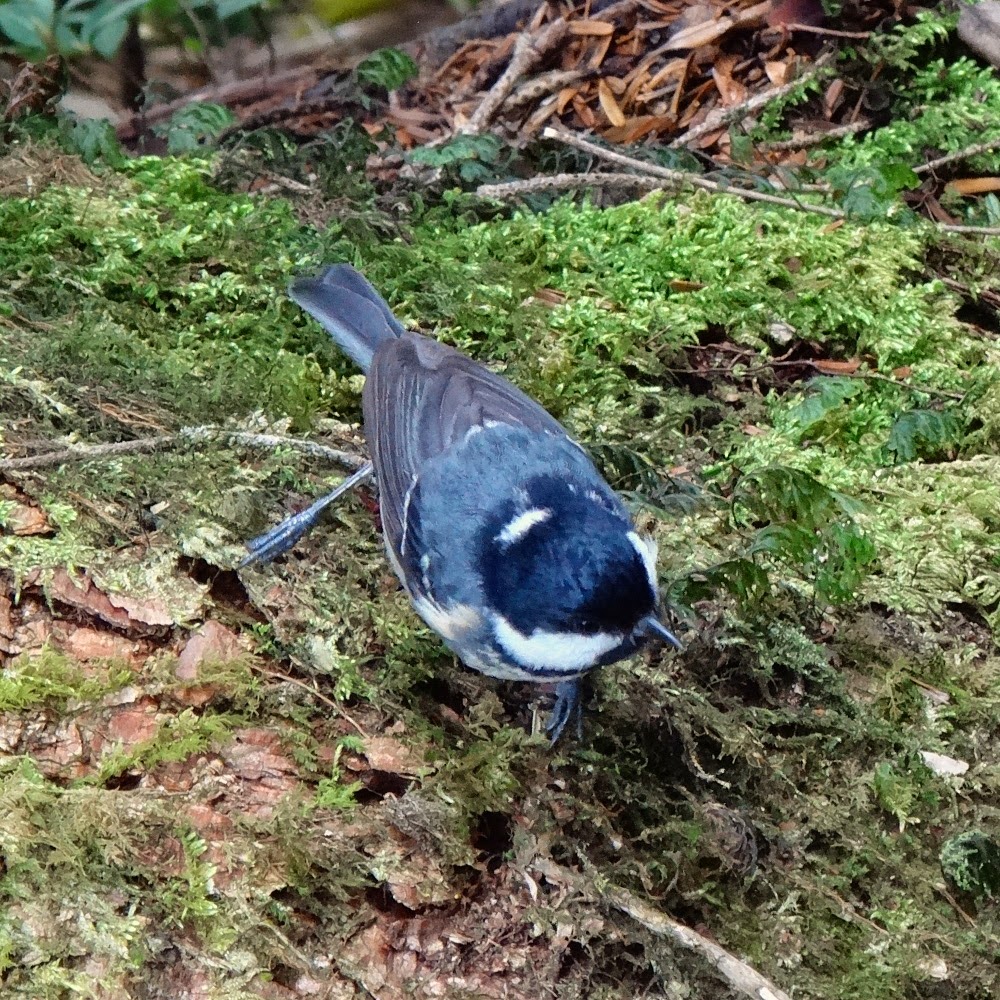 Coal Tit, Periparus ater (higara)
Smaller than the varied tit and grey.
Often in flocks that sometimes mix with other species such as varied tits. 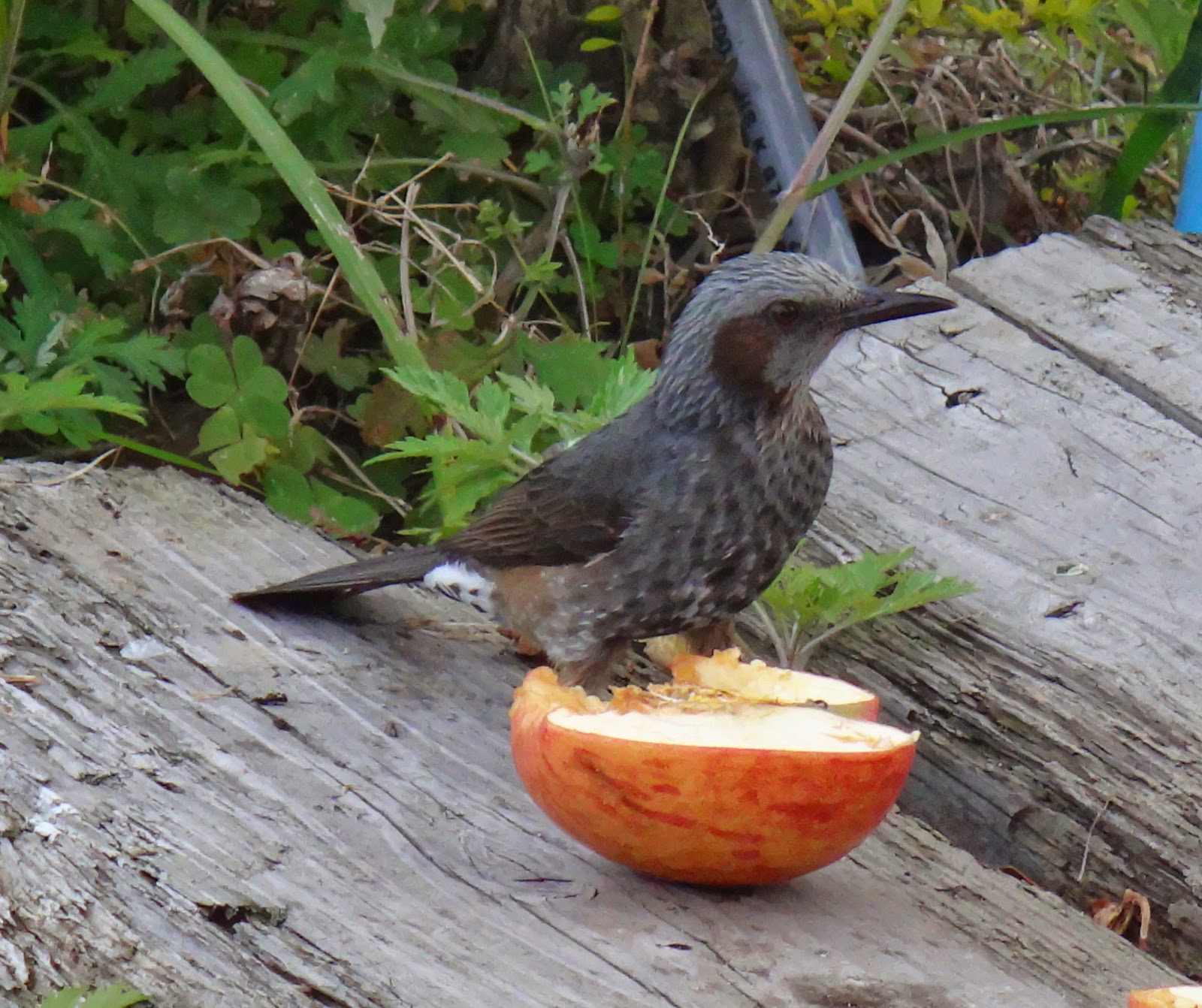 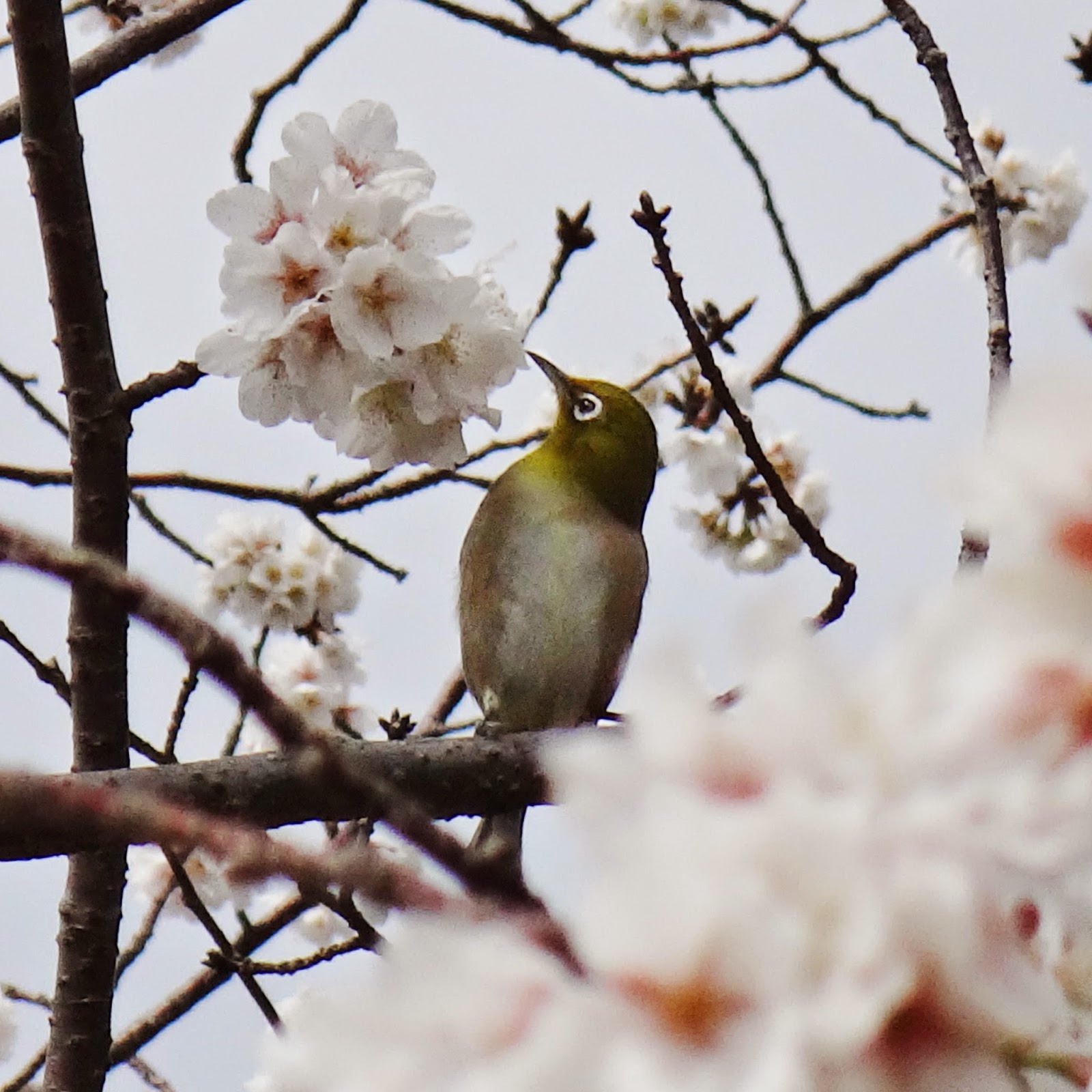 Japanese White-Eye, Zosterops japonicus (mejiro)
Sweet chatter that once created a market for these birds as pets. They are visible looking for flowers year-round, and are especially visible in winter, when flocks from colder areas also visit Yakushima, and when the camellias and sakura trees bloom.

Japanese Bush Warbler, Horornis diphone (uguisu)
With its characteristic, "ho---kokekyo!" call, this bird symbolizes rural Japan as much as any, but it is notoriously hard to spot in thick brush. 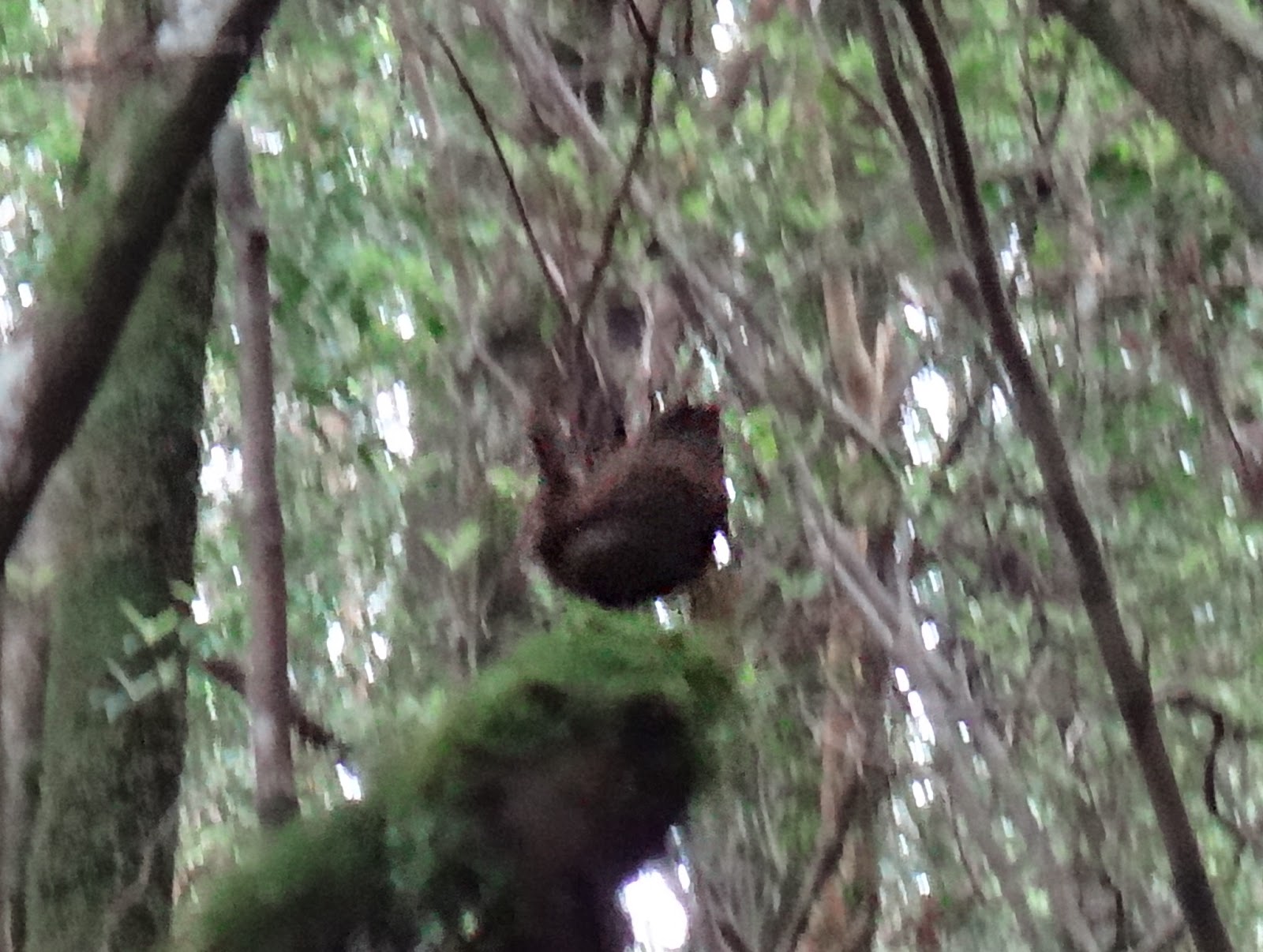 Eurasion Wren, Troglodytes troglodytes (misosazai)
Small bird with a big voice, heard in spring through late summer. The males will stand atop a branch, point their tail-feathers straight up, and open their mouths wide to sing. 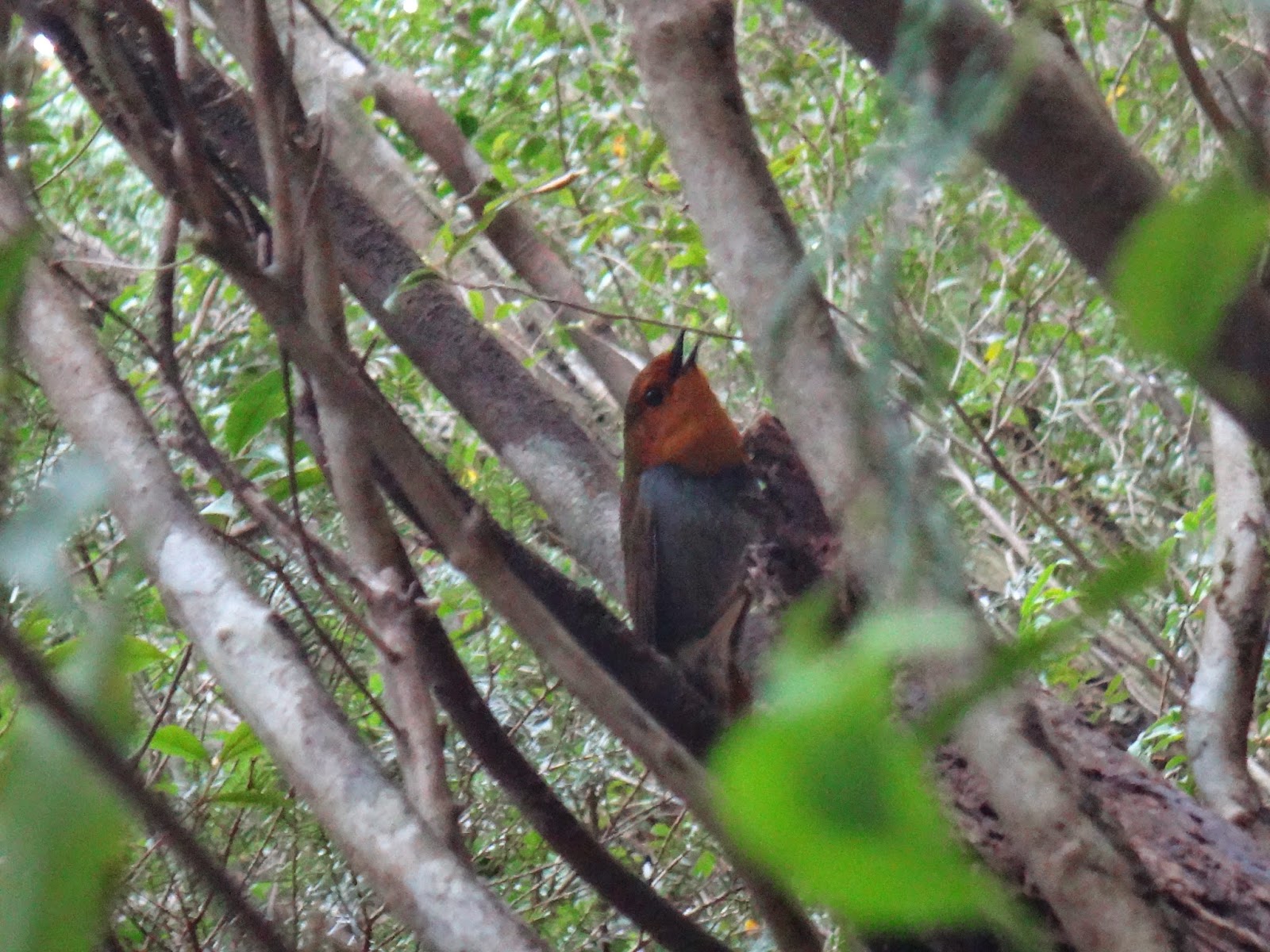 Japanese Robin, Erithacus akahige, (komadori)
I once had a client who kept mistaking this bird for her cell phone. The female is a more drab brown. I often see them in pairs, with the male following the female and calling to her. 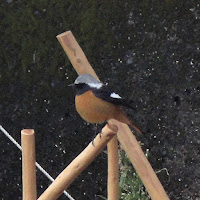 Daurian Redstart, Phoenicurus auroreus, (joubitaki)
(male)
These birds winter in Yakushima. I can't explain why the males seem to be more visible in the mountains while the females are more prominent in around town. 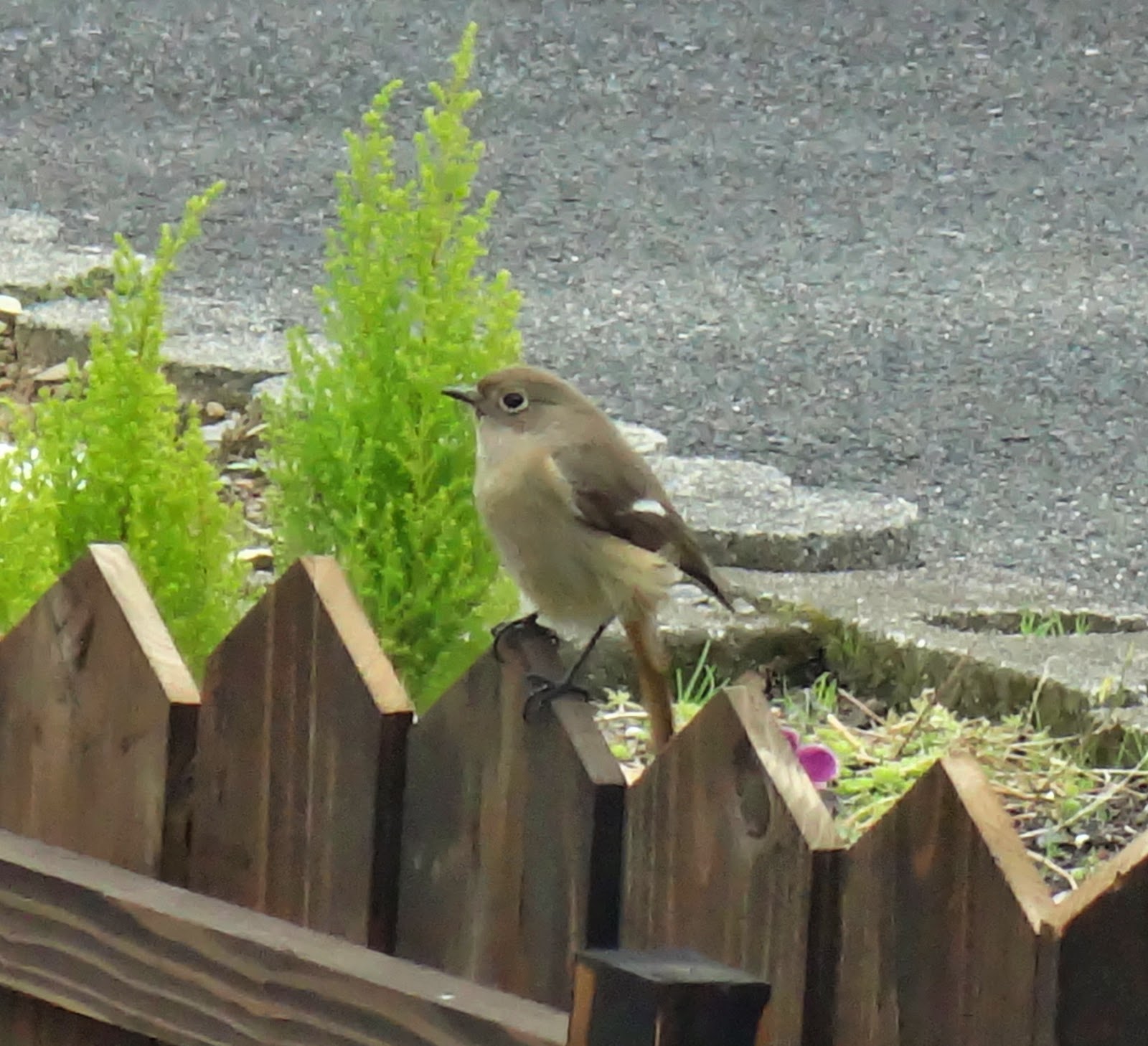 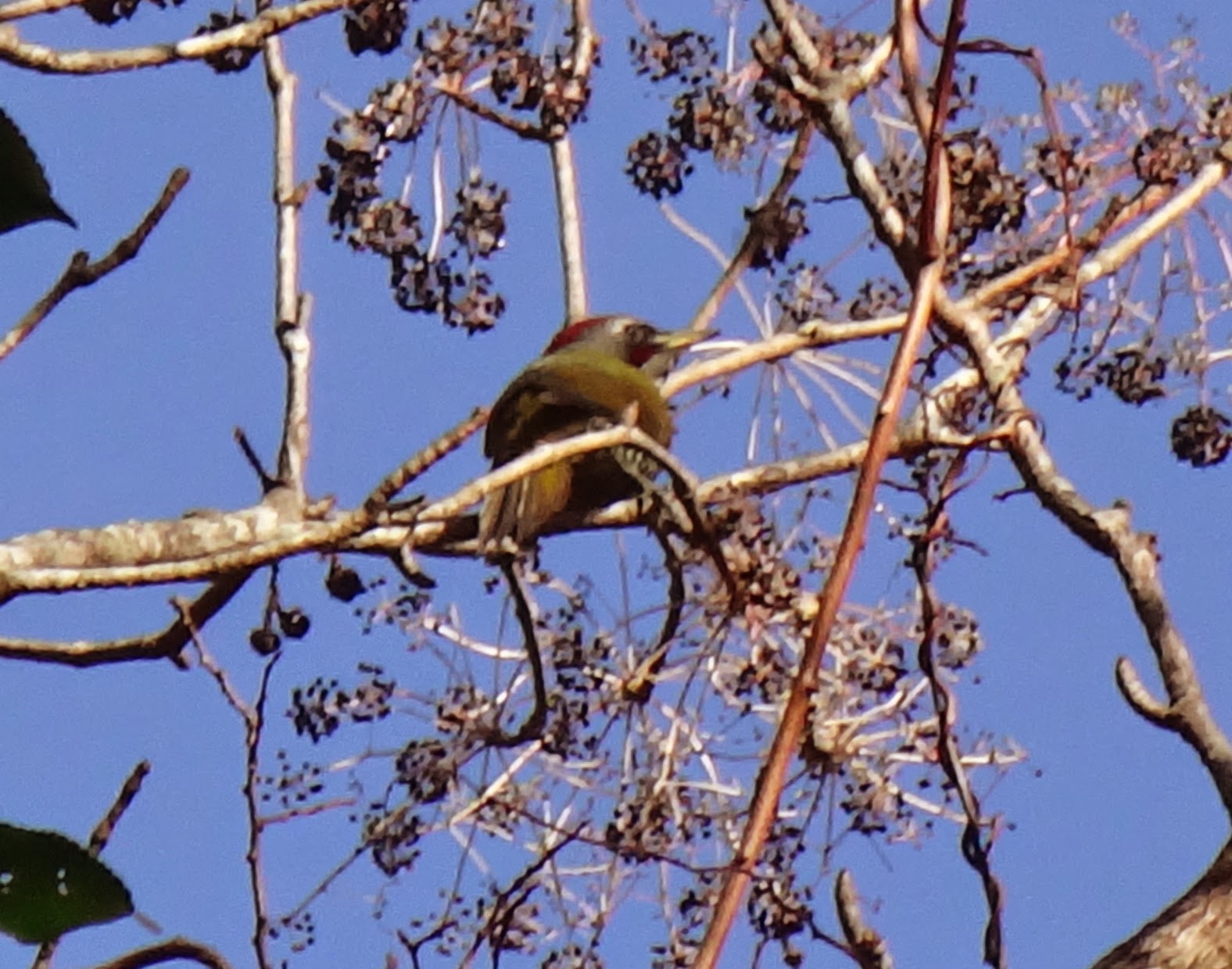 Large, easily identifiable bird. If you hear a prolonged knocking, it may be either this bird, or the much smaller black-and-white pygmy woodpecker. 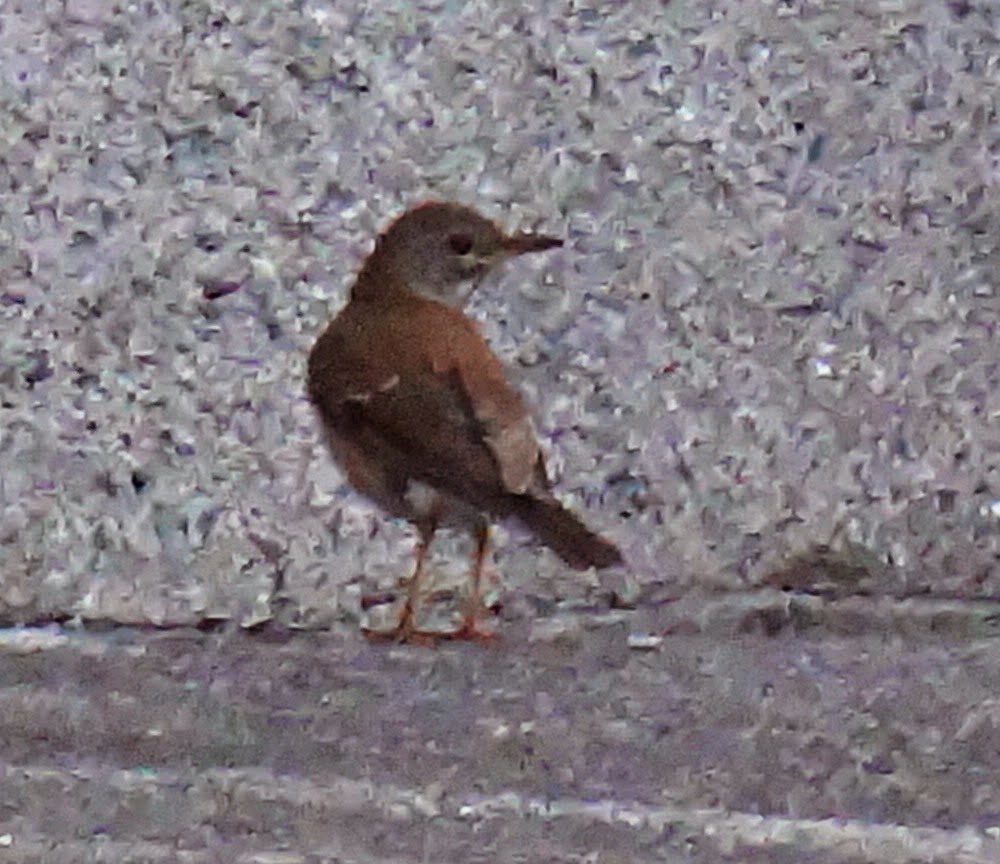 Pale Thrush, Turdus pallidus (shirohara)
This bird winters in Yakushima. It makes a sound that reminds me of wet flip-flops as it leaps down the street; quite startling when you're driving. 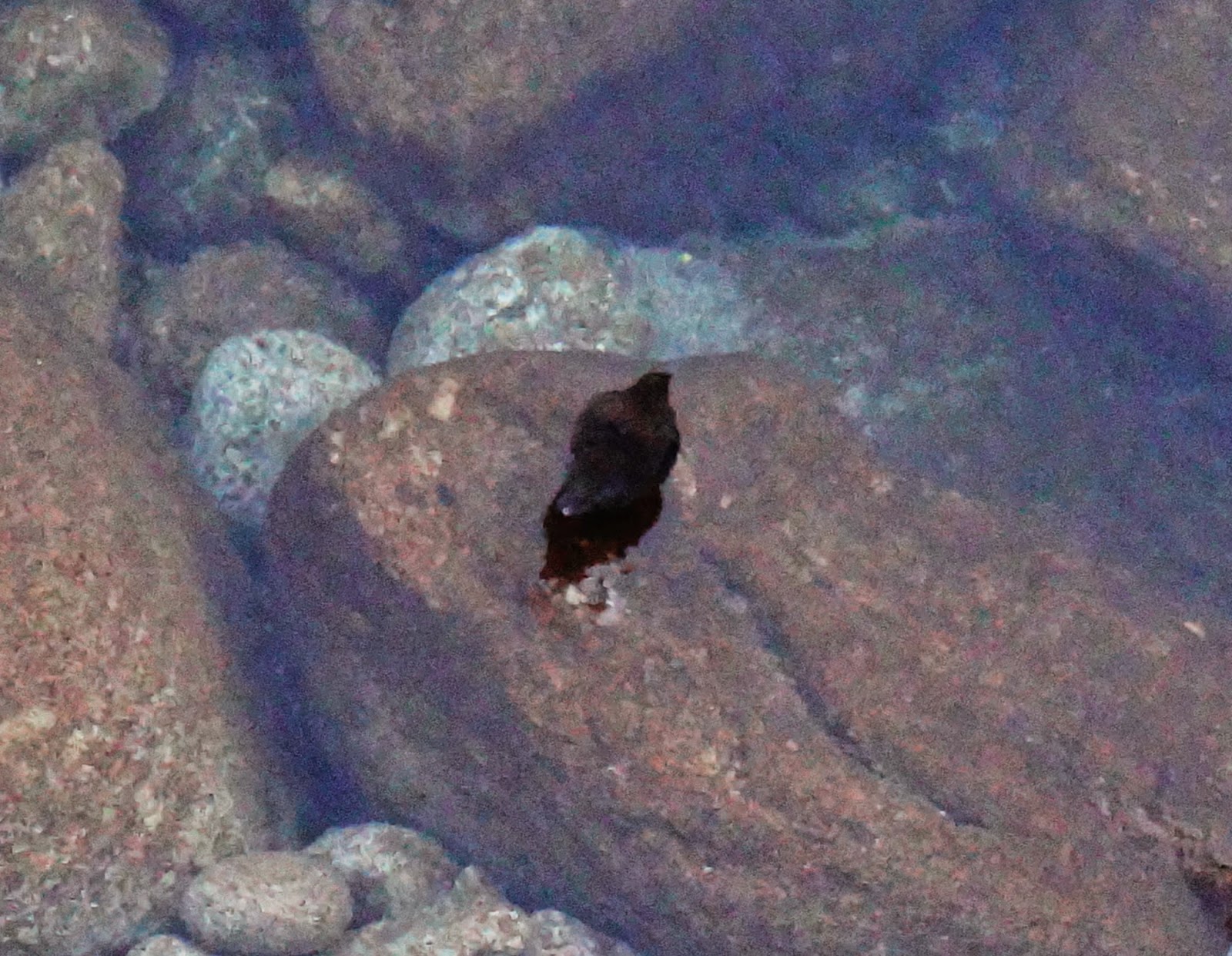 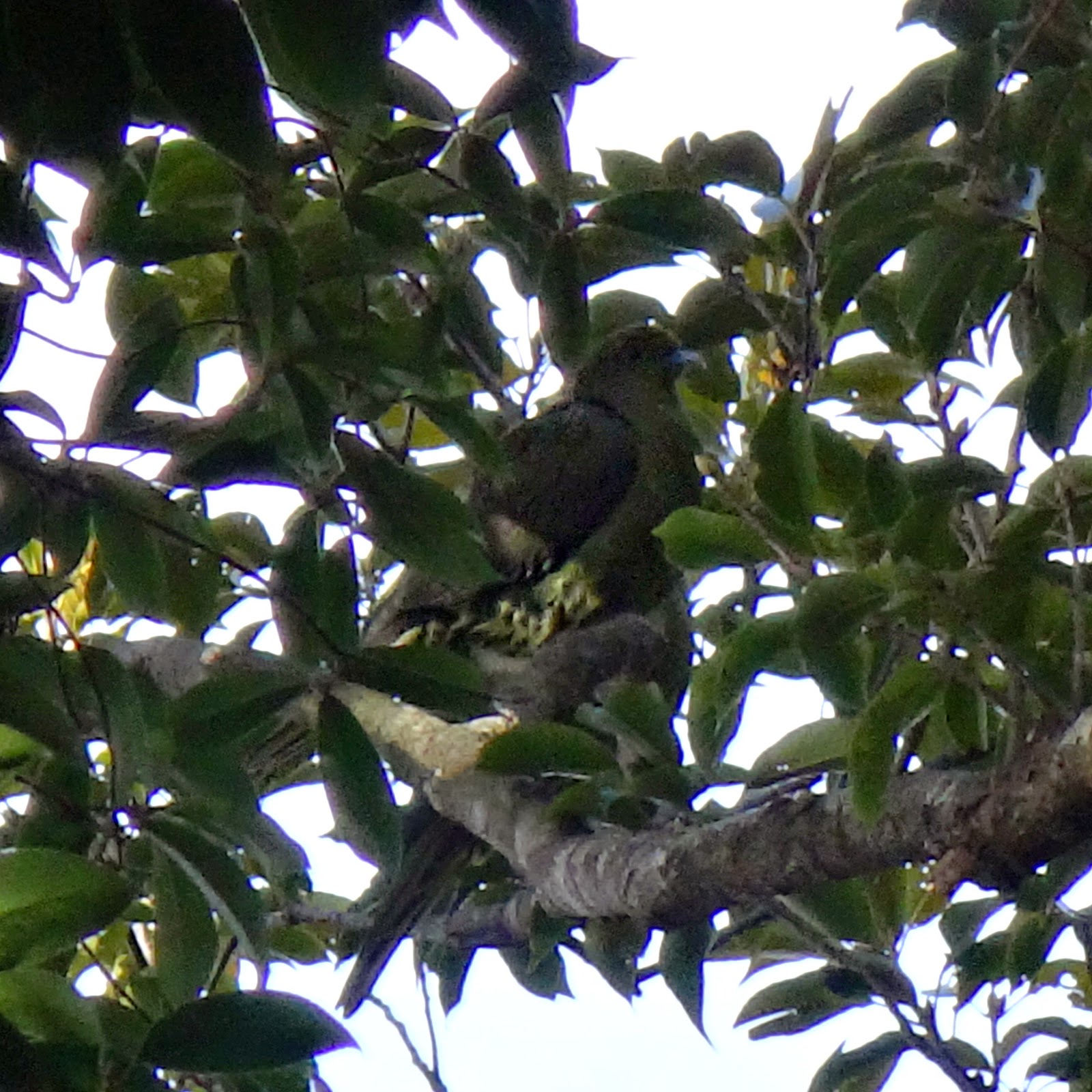 Whistling Green Pigeon, Treron formosae, (zuaka-aobato)
A shy bird, but the call like a siren or flute is unmistakable. 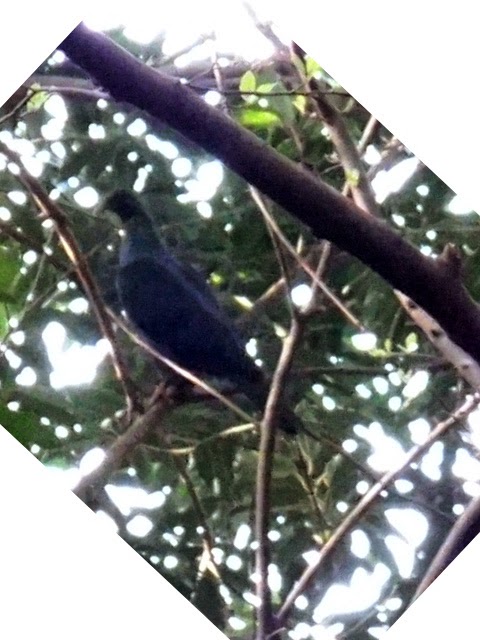 Japanese Wood Pigeon, Columba janthina (karasubato)
Even shier than the whistling green pigeon, this bird has a very deep, owl-like hoot. It is a registered national treasure.

Pacific swallows seem to be pretty common, but especially when glanced from afar, I wouldn't put my money on naming swifts and swallows. Come spring, flocks swoop overhead or through town and often build nests in carports. To my untrained ears, the voices sounds similar to an ashy minivet, which is another bird you don't often get to see close up.

Yellow, grey, and black-and-white: Wagtails are especially visible in open spaces at low elevations during colder months. But yellow ones [officially called Grey Wagtails] like this one can also be seen flitting down the trail among the central mountains.

Black Kites
(tobi or tonbi)
These birds are a common but lovely site above the coasts. Where I grew up, we have lots of sea gulls and terns, but in Japan, black kites dominate. While they're not really forest birds, if you're hiking in the outer mountains, you may spot them overhead.
Posted by Yakushima Life