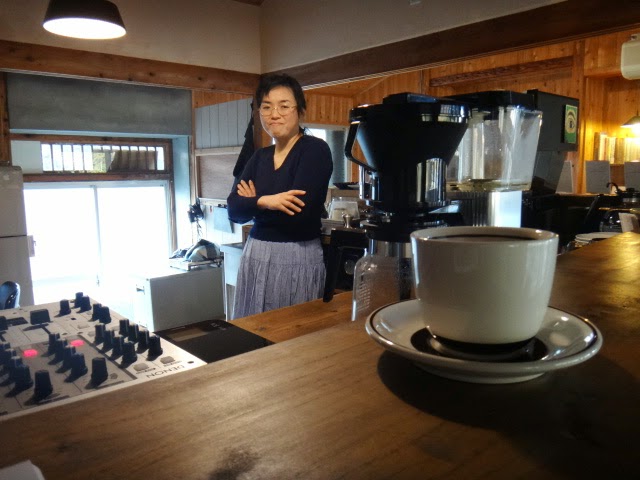 I've been searching for this cafe for years, literally. You see, two years ago, I had a client from Korea who brought this article that mentioned the Issou Coffee Roastery (Issou Coffee Baisenjo), and the article included a map, and the map placed the cafe squarely in the middle of a hillside forest. D'oh! 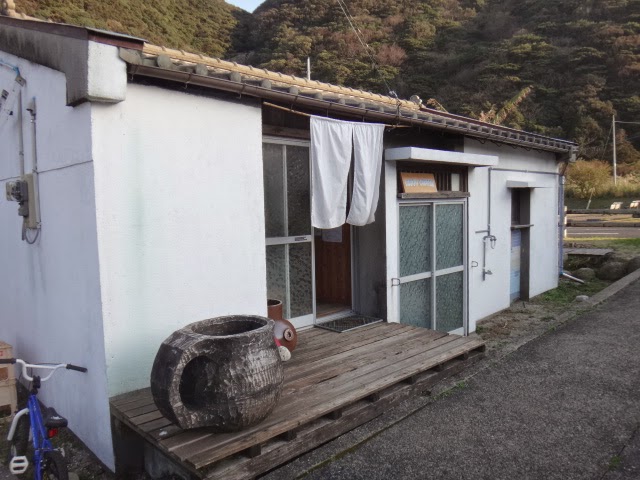 The Issou Coffee is run by a husband-wife team, and when I happened to meet the wife selling samples at a bazaar on the south side of the island earlier this year I was thrilled to learn that Issou Coffee is actually very easy to find: It's right on the main road, standing by itself in front of the park where the Nuno-biki Waterfall flows. I suppose I never noticed it because it only looks like a cafe for the five hours it's open on business days.

During the hours of 1-6, it's the quintissential cafe:

It's chic, with an impressive turntable behind the counter that comes alive during occasional music parties.

It's simple; no frills, no long menu.

It's cosmopolitan. Today's brew is a Thai coffee from from Brazil.

It's relaxing, with outdoor space to sip a latte in good weather.

It's sophisticated, harboring a range of alternative Japanese books by authors with deep ties to Yakushima.

It's retro, harkening back to the generation of Japan's answer to the beat movement.

I haven't yet mentioned Sansei Yamao (1938-2001), a poet whose name resonates with the beat movement in Japan, both a big reason for many people to visit the community upstream in Issou and for many others a big reason to steer clear of the area. That will have to wait for another blog post, but if you grew up in the beat/hippie generation, you may feel some kindred spirits calling.

If, like me, you weren't born yet, you can still sense the import of ideals seeping up from floorboards.

My reminiscing about days I never knew in a land I've only recently moved to was cut short when the shop's husband arrived with their son on a skateboard. YES. And if you want a second opinion, check out this column in ANA's Japan travel blog.


*Hours are subject to change, so please call the restaurant or check ahead.
Posted by Yakushima Life