There's plenty of human-erected treasures to search for on Yakushima:

I mentioned before on my facebook page that I'd like to visit all the mountain-peak shrines in Yakushima. Most of these are on the lower Exterior Mountains and require only a two to three hour hike from the trail head.

Finding the trail heads, however, is the real challenge. Beyond the major routes in books and tourist maps (i.e. the regularly-maintained trails to places like Mt. Miyanoura and Jomon Sugi, places that require nothing more than physical preparation), it's not obvious how many of these old trails are still in use, where they begin, and if whether or not they've just disappeared into the brush. To make matters ten times more complicated, it turns out even the latest maps of Yakushima have some number of phantom back-roads. And the roads that do exist may be half-washed away or blocked by gates for various reasons.

Through a mix of GPS, asking for directions, and trial and error, any day you find a new, legitimate trail head is a good day. Today was one of those days, and that's why I leave you with a picture of a (genuine, Yakushima) cow. 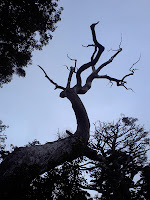 After hiking most of the other major trails, I finally did the less-popular Hananoego Trail last week. This is a gorgeous trail that meanders up and down for 8.4 km from the far end of the Yakusugiland Park, to Hananoego, the high-altitude peat marsh.

The trail splits off into the deep forest halfway along the 150-min Yakusugiland course. Almost immediately, I lose my sense of direction and begin to feel a vague sense of isolation. I remember reading somewhere that the Hananoego Trail was originally staked out for a national foot race, and, although I have my doubts about that, it certainly requires a bit of sweat and perseverance to follow this trail until it finally reaches a forest ridge walk. This is only major trail that has taken me nearly full map-time to walk (6-7 hours from the parking lot at Yakusugiland to Hananoego, where the Hananoego Trail meets the Yodogawa Trail. ).


About 90 minutes after leaving Yakusugiland, signs lead down a short path to Yamato Sugi. This cryptomeria is over 10 meters around, nearly 30 meters tall, and has an estimated age of 3,000-4,000 years.

There's one beautiful stream-crossing (a tributary of the Anbo River), so check for weather-warnings if you do this trail.

Although this trail doesn't lead to a mountain peak, it does have one rocky outlook, which you can use a rope to climb up. This is the first spot where I was finally able to get a sense of location. You can see across to the highest Interior Mountains, and also "Tofu Rock" beyond Hananoego (not in my picture).


Finally, the trail leads to Ishizua Hut. This hut is very clean inside, and big enough to hold twenty people, although it's usually rather quite. Of course, there is a stream nearby for water, and a toilet, but at 1580 meters nights are cold, and some people say it's haunted. . .

Within an hour of leaving Ishizuka Hut, I reach Hananoego, one of my favorite places. There are the remains of an old, collapsed shelter, and a very welcoming bench . . .
Here, the trail ends, and I take the Yodogawa trail to get back to the road. The Yodogawa trail follows a short boardwalk through the Hananoego peat marsh before turning back into the forest. The peat is as old as 2,600 years, and there is often a variety of flowers depending on the season.


The forest is thick with giant cryptomeria, fur, and spruce trees disappearing into the mist. A bridge crosses over the calm, emerald Yodogawa River just before the spacious Yodogawa Hut (much more popular than the Ishzuka Hut!), and I know my hike is almost over . . .

. . . Except that when I reach the Yodogawa Trailhead I still have 7.5km of asphalt between me and my car. But at least it's downhill!

I think that return route down the asphalt street is main turn-off of the Hananoego Trail, but this trail is really too long to do a round-trip in a day without following the street back, and too short to split into two days.

So, I guess the Hananoego Trail is best for folks who want a good, long, rough hike through the woods, because this trail is just as demanding as hiking to a mountain peak, except that there's no peak to look forward to. Also, it's not entirely impossible to get lost on this trail, since it sees so little traffic. But, as one of several routes to Hananoego, it can serve as a gateway to the Interior Mountains, and if you're looking for more moss than people, this is a beautiful route! 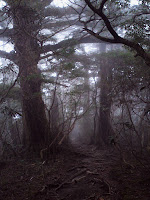 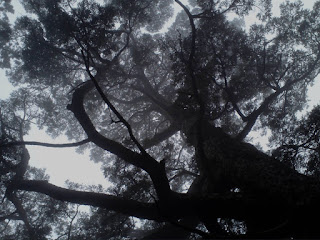 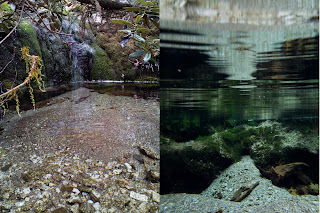 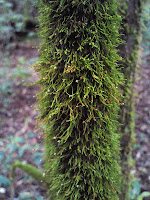 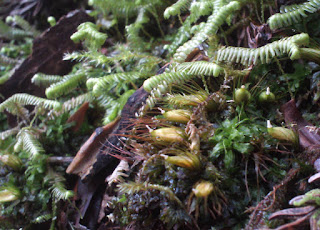 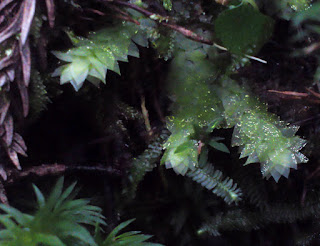