Deer Trends -- A tribute to a deer I once knew

Life in the forest lasts for thousands of years for the sugi (Cryptomeria) trees,
but, alas, on this scale, the animals are fleeing transients, glimpsing only a few years, a single tick on the astronomical clock before their time is gone. They cannot know the dark past of logging, as even we can only imagine the forest before the axe was set upon the massive trees. Who knows how many deer thrived on the island back then, with man as their only predator!

Let's briefly go back to the beginning. Yakushima was connected to mainland Japan during the last ice age, say around 10,000 years ago, and both people and deer, but no wolves or bears came to Yakushima. Then, 7,300 years ago the Kikai Caldera, a volcanic group halfway between Yakushima and Kagoshima blew up and coated Japan in ash, killing just about everything in southern Kyushu. In Yakushima, only a small part of the island in the south remained unburied, allowing a handful of deer and monkeys to survive to repopulate the island. Before long, people were also back.

Fast forward to modern times. Full-fledged logging began in Edo times, and in the 19th century, the deer hunting season was set to coincide with fall and winter, when the bucks have a full set of antlers. Although measures to protect old growth trees were taken during Meiji times, logging flourished, especially during wars, reaching a peak in the mid-20th century days of post-war reconstruction. Loggers often wore a patch of deer fun at their waist, which they could use to wipe their hands or sit on, but the deer population dropped from an estimated 10,000 to 20,000 head pryer to 1950 to 2~3,000 head in the 1960s. For a period of seven years in the 1970s, hunting was banned, and as logging then slowed to an end, new growth started filling in the swaths of clear-cut land. Consequently, the deer population boomed once more, growing at a rate near 20% each year in the 21st century and approaching 20,000 head.

When I started guiding, you could hardly call a hike complete without spotting several deer, and come spring, the bellies of female deer bulged with pregnancy. Out of over 200 hikes to Jomon Sugi, only once did I go without spotting a deer. Until the summer of last year, 2015, when, inexplicably, deer along the trail started to die. At first, we attributed the carcass stench to the season: Many deer are born in early July, and it's only natural for a few pregnancies to fail. But as summer wore on, I kept a mental list of places where I needed to distract guests with weaker stomachs. Come winter, deer-less hikes to Jomon Sugi and around Shiratani Unsuikyo became quite common. Guests would ask, Where do the deer go in the winter? And I no longer had a good answer. Where were they? Dead?

I think all the guides who regularly hike to Jomon breathed a sigh of relief when deer started reappearing in the spring, and I spotted some familiar deer faces that I hadn't seen since the previous year, but deer-less hikes are still eerily common, and the annual spectacle of pregnancies and births and newborn deer is nothing like in previous years. Some folks say they've seen newborns along the Jomon trail this year. . . I'm not sure I believe them.

What I do know is that on June 16 or 17, another old acquaintance passed; I believe he was the one I depicted in a postcard last year. With that full set of antlers, he could not have been young, so perhaps it was just his time.

I haven't heard anything about disease, and some studies have concluded that populations of Japanese (sika) deer are self-regulated by factors like disease and food pressure, and I think it's quite possible that we've finally reached a peak in the population. Also, the central mountains and the West Forest are still chock-full of deer, so I suppose it's nothing to worry about. Still, it's a bit lonely to hike to Jomon Sugi without always seeing several familiar deer along the trail. And I do wonder how the population will change in years to come.

Anyways, I've learned to be grateful for each deer encounter, and to feel respect for each animal. 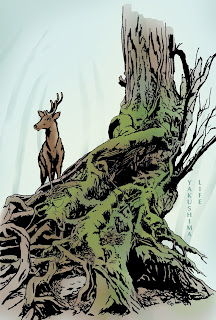 I've had several inquiries about T-shirts from Yakushima. I'm happy to say that designs seem to have vastly improved and expanded since I first visited Yakushima. (Although they are still mostly heavy-weight cotton.) There are several local designers including Green Design Works (known for the Wilson Stump heart design ) and Garamosta (whose train-track stamp design may strike a cord with anyone who's trekked to Jomon Sugi). The biggest selection of shirts is in Miyanoura at  Furosato Ichiba, a store specializing in souvenirs and goods produced locally, and at the Kankou Center next door. Folks in Anbo can find a reasonable selection at Takeda Sangyo or Sugisho (and Garamosta is a short drive up the road). Folks in Onoaida can try the gift shop in the JR Hotel.

Here are some of the designs you might spot:


Designs and colors are changing all the time. What designs have you found? (Please feel free to add your favorites in the comments.)


Posted by Yakushima Life No comments: