"Want another chocolate?" my companion called from behind. I was antsy because we'd just taken a break ten minutes back, but I couldn't complain because usually I'm the one in the back, and this time he was offering whiskey-filled chocolate from Europe. I was a bit annoyed, however, because I knew the woman in the information booth had reached the peak in 3 hours, and we'd been told it should take us two hours, but at this stop-and-go pace. . . "Unlike you, " my companion explained, "I don't have any extra fat to burn because of this diet. One chocolate gives me ten minutes of energy."


Hasa-Dake is a half-day hike up the mountain still visited annually by pilgrims from the town of Hirauchi. It seems to me that this mountain attracts more than its fair share of beginning hikers, and hence has a rather undeserved reputation as a challenging, harry--perhaps even treacherous--peak. Anyways, there are no Yakusugi or waterfalls or moss forests, but there is a remarkable vertical distrubutiom of fora, and the view from the open peak is lovely . . .  and Hirauchi also sees more fair weather than most parts of Yakushima. (Hirauchi is also known for the Youth Hostel, and a sea-side hot spring that is only usable at low tide.)

Map-time is about 3 hours up and 2.5 hours down, plus time to get to the trail head. Oh, to get to the trail head, you'll want to ask the locals for directions. You basically head north from the Ozaki bus stop until you get to a recently paved street, and then head up an old logging road (not the sort of road that most passenger vehicles can tolerate) on the far side of the street, but it's not marked. Eventually, the logging road reaches a river and the bridge has been long-since washed away. From here, you can follow the pink trail-marker ribbons. (Please pay attention to these; there are old trails and deer paths that lead off in other directions. . . ) I don't advise this hike to anyone not used to hiking on rugged terrain or anyone with mixed feelings about hiking up a valley of boulders and loose rocks.

There are also a couple areas with ropes, and one area looks a bit like a gully that might get ugly in a storm. So check the weather forecast and skip this hike if you get vertigo.

In the end, we made it up in two hours and enjoyed an overcast, but clear view from the top.

I found a bit of refuge from the wind at the recess where the shrine (called a hokora) is located.


On the way back down, we took a little time to enjoy the typical Exterior-Mountain flora, including giant crape myrtles and beautiful ferns.

photos by Mitsuhashi-san and me.

I have to apologize that I failed to record both the beginning and end of the trail. I'll have to go back!
(In the mean time, just ask at a tourist information booth for info!)

My hiking partner looked at me and said, "You're wearing jeans??"

It was a balmy day for January -- T-shirt weather -- and I'd climbed Aiko Dake before, so I answered without hesitation, "Yeah, why not? If it gets cold or rainy, I'll just head back down."

On this particular day, the peak was covered  in snow drifts and ice. Fortunately, we didn't need our spikes (neither of us had brought them, anyways), but the ropes to assist the steep climb were iced over and my hands turned numb even inside my double-thick (but finger-less) fleece gloves. The wind blasted us on the peak, and I looked longingly down towards the sunny coast below as my partner took pictures. If he was trying to break my patience, it worked, and I graciously accepted a pair of disposable heat-pads so I could descend the rope course before my hands froze stiff.

you got the best of me again.

Aiko Dake is one of Yakushima's most climbed minor mountains, after Mocchomu Dake and Tacchu Dake, perhaps because there are several legends about "Aiko." The one I'm most familiar with says she fell in a river, but was saved and then adopted/abducted by monkeys, leading her boyfriend to commit suicide. At any rate, if you attempt the climb, maybe you'll agree that this mountain has a real penchant for heartbreak.


The trail head is well marked: Just follow the signs (in Japanese) from the big strangler fig tree next to the main road in Koseda. The trail is also well-marked with pink tape.


But. . . in about 4 km  the trail climbs from 180 m to 1200  m above sea level without the up-down typical of most of Yakushima's trails: Mostly, it's just the up. There are no vistas until you reach the top, and along the way, there's one water hole . . . which was dry twice when I climbed Aiko Dake (once in November, once in January). Then, just when you think you're nearing the peak, you instead cross a small valley. On the other side await several ropes and a scramble (a rather scary scramble in high winds, fog, or icy conditions) to the top.

Along the way, you'll pass one old, named stump, but the placard is almost completely illegible, and it's easily dwarfed by Yakusugi stumps in other parts of the island.

So why go through the trouble?

From the moment you leave the trail head, I personally find this area has a very casual, walk-in-the-woods feel. It's a bit hard to explain, but, partially because of the lack of deep moss forests, Yakusugi, and unusual boulders, I find this trail mentally relaxing. But I think most people might enjoy it for the following reasons:

First, there's the view from the top. Both times I went I was greeted by fast-moving clouds and ephemeral glimpses of Yakushima's interior, including Tacchu-Dake (the candle stone), the Inrepresents aterior Mountains, and the Odate dam where Yakushima generates electricity.

Second, the forest is a good example of a "typical" Yakushima habitat. If you're a Japanese-speaking plant-lover you'll notice that the results of a count of tree species posted on signs at every 200 meters of elevation change. (I admit these signs baffle me: I can't quite match the numbers or the illustrations with what I see, and I look forward to the day I can walk the area with someone from the Forestry Agency. But I think the overall idea is that the count changes with elevation.) The forest is full of broad-leaf evergreens, which may explain why it's part of the Natural World Heritage Area. 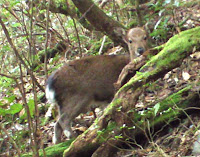 There are of course a few deer and probably some monkeys. (How else can I explain a yuzu* fruit I found near the trail?)

Third, (maybe this should be first), it's one of the mountains with an active tradition of annual pilgrimages. The local school children also (are compelled to) climb it. (That said, I would not bring kids on this hike. The scramble near the peak can be quite dangerous.)

And finally, if you're looking for a challenging hike, I think you'll enjoy the physical exertion. The ropes are fun and the trail has fewer protruding roots and rocks to slow you down compared to most of Yakushima's trails.

Just be prepared: Even when weather at the bottom is spectacular, Aiko-Dake may be hiding heartbreak conditions at the top. 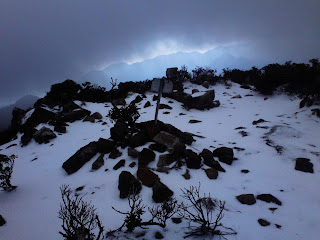 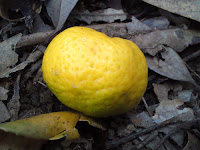 *Yuzu is a kind of citrus with a great smell. It's a popular fruit to throw in the bath tub, but it does not grow near the trail to Aiko Dake.